"Come and See" is more like "Go and Lapse" 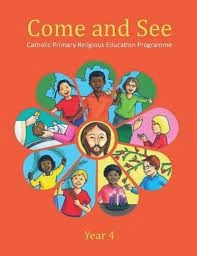 According to the excellent website Pro Ecclesia et Pontifice, currently, some 96% of children who attend a Catholic school, will lapse from the Faith.

That is one appalling statistic.

All of my working life I have been driven by a results based accreditation of performance ideal.
That means, in plain English, that you produce spectacular results or you are out on your backside.

And quite right too. The same should apply to those who have driven such a low level and uninspiring programme of Catholic RE over the years.

How many young souls have been lost to God over the years as a result of an impoverished and perverted religious syllabus?

Indifference, apathy, idleness and incompetence have all played their part.
And, evil intent must be added to that tally.

When our children were young we had the heretical programme called 'Weaving the Web' to contend with.

Opposition to that meant that you were isolated and castigated within the school/parish social network; not that it worried us one little bit, but, such antagonism did effect our children who bore the brunt of modernist Catholic sniping.

I'm afraid that the title alone has me reaching for the sick bag.

And, according to Pro Ecclesia et Pontifice, "Come and See" carries on the fine tradition of omitting any mention of sin and other key factors of the Faith.

Here are some of PEEPs main concerns regarding "Come and See":-


The Book consists of 262 pages, including five full page illustrations and many smaller illustrations. Twenty pages cover “Other Faiths”, and the first forty-three pages are devoted to telling teachers HOW to teach, even though they are, presumably, trained and qualified professionals, many perhaps with more experience than the author. Eventually, on page 44, the book starts outlining WHAT to teach.

Were I to cover every heresy – explicit and by omission - in this Programme my review would have to be as long as the 200 pages which cover the teaching to be given, so I will cover just the more serious omissions, remembering that we can commit Heresy by omission. Pages 44,45 and 46 have Grids showing all the Scripture references, Topics and Themes taught throughout the Primary school, covering ages 4/5 years – 10/11 years. When these grids are compared with the 1994 ”Catechism of the Catholic Church” (CCC) which Bl. Pope John Paul II declared “the Norm for teaching religion” they reveal some of these serious omissions.

1.  The attributes of Almighty God are not taught, such as He is everywhere so always close to us, though these are found in the CCC;

2.  Spirit and what the word Spirit means. They need to know this for

3.  Angels, Guardian Angels, the Devil and his evil spirits who are all omitted as well, even though covered in the CCC;

4.  That we are in the Image and Likeness of God because we have Spiritual Souls with Intelligence and Free Will,( 7 paras in the CCC.)

5.  Adam and Eve, the Fall, Original Sin and even Sin itself are all omitted in spite of having 60 entries in the CCC. This makes it impossible to explain the Incarnation and the Redeeming Passion and Death of Our Lord, so we get nonsense such as the Saviour will rescue us ‘from those who threaten us,” (on page 53.)

6.  Grace, which has over 20 entries in the CCC is never even mentioned, not Actual Grace, Sacramental Grace or Sanctifying Grace / Supernatural Life. So the teaching on
7.  Baptism is incomplete. It is several times merely presented as “a welcome or invitation to belong to God’s family.” There is no mention of S.John ch3 v1 ff where Jesus explains to Nicodemus that unless a man is born again of water and the Holy Spirit he cannot enter the . The CCC teaches Grace/Supernatural Life in over 90 entries, so why omit it? This rhyme helps teach it -
When little babies are baptised, God’s greatest Love is shown
For then he gives new Life to them, A life that’s like His own.
We thank you Lord for this great gift, The treasure of our race
Our Lady’s soul was full of it. The Angel called it Grace.

8.  The Incarnation There is no mention of why Jesus, the Second Person of the Blessed Trinity became Man, though on page 102 we are told “the Word became a human person”. This is not true. Jesus was, is and always will be the Divine Person who became Man to redeem us from sin and hell.

A shame that, after all this time, the Bishops can't produce a doctrinally sound religious syllabus for schools.

Do they, I wonder, lie awake at night fretting over the fact that, only 4% of Catholic children going through the system, will keep the Faith?

And, if they don't lie awake tossing and turning, why not?

Are they content to survey a scene of abomination and not suffer any regrets?

Which point leads one to consider whether the Bishops are a force for good or........something else.
Posted by Richard Collins at Monday, November 18, 2013