What has Wales done to deserve such treatment? 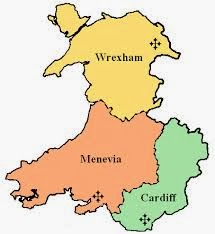 Here we are, hungry for the Latin Mass and for the clear doctrinal teachings of Christ and what do we get?

A trinity of Bishops for the three dioceses of Wales who are most accomplished, it appears, in the episcopal art of sitting on one's hands.

At least Nero produced a good tune while Rome incinerated.

The lead Diocese (Archdiocese of Cardiff) embraces our capital city and a fair old slice of English borderlands.
But does it provide in accord with Summorum Pontificum?

Hardly at all. One or two doughty priests offer the Mass of all Time in far flung corners of the Archdiocese but that's it.

In fact, by my very rough reckoning, less than five per cent of diocesan priests are able to offer the Latin Mass.

Menevia is much the same.
Home to the National Shrine of Wales, Our Lady of Cardigan, (not that you would know it) it again offers lip service to those who follow the old rite.

Not that the work undertaken by those committed priests who minister to the traditional community is not appreciated. It is just that we should have more.

And, finally, the Diocese of Wrexham, under new management since last year when Bishop Peter Brignall was installed.

This Bishop is certainly following in his predecessor's footsteps (ahem).

The Diocese appears to have been either overtaken by Martians or the victim of a selective nuclear strike, judging by the resounding silence emanating from North Wales.

Just how, I wonder, has Bishop Brignall fulfilled his installation pledge of resolving to build up God's Church?

There's not much in evidence on the Diocesan website.
The Bishop's diary lists the usual vitally important series of diocesan meetings and then, for Holy Week we have Maundy Thursday replaced with 'The Lord's Supper' and Good Friday has disappeared to be replaced with a 'Celebration of The Lord's Passion.'

Nitpicking, I may be but I dislike the most serious and grave days in the liturgical year being subject to euphemisms.

To be a traditional Catholic in Wales in these troubled times you definitely need brains, or, rather, Brains. 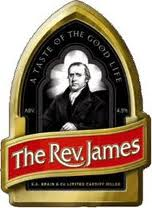 No, this is not a call to the intellect (on this blog, you cannot be serious?) but it is a call to Brains bitter.
To be more specific, the Reverend James bitter from Brains Brewery in Cardiff.

I find the occasional pint, or two, of "the Rev" as it is colloquially known, goes a long way to reducing my blood pressure that is so subject to episcopal inadequacies.

But, I would forgo that pleasure if their Lordships stepped up to the mark and provided us with an EF Mass in every parish on every Sunday and Holyday.

That would certainly build up God's Church, if that is what the Bishops want.