Jobs for the grils! 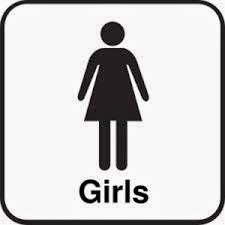 Some years ago, many years ago, in fact, a line of graffiti appeared on one of London's underground (Metro) stations.

Some sad soul had written in a blank space on a poster: "I love grils"

That line stayed there for a week or two until, one day, passers by noticed that someone had put a line through "grils" and had written "girls" underneath it.

Another couple of days and a fresh line was added.

It stated: "So what's wrong with us grils then?"

I like simple and ridiculous humour (no comments on that please) and a post on the Catholic Sacristan blog jogged my memory regarding a topic on altar servers that has been gnawing away at me for quite some time.

Altar "boys" are well catered for in the Faith; they are the norm for all Tridentine Latin Masses, in accord with the rubrics for the EF.

But there is nothing compatible for the girls. And there should be.

I don't quite know what, maybe someone out there will be able to come up with something that is well distanced from church cleaning and making the teas after Mass.

There needs to be a real role for girls and young women that does not patronise.

A part for them to play so that, just as serving on the altar gives young males an insight into a priestly vocation, the female role introduces them to the possibility of serving God as a nun.

The male altar server also has guilds or societies that he may aspire to, St Stephen's Guild and the Society of St Tarcisius.

Excellent. But what is there for the girls?

Maybe one of the traditional orders or the LMS even, might consider establishing a Guild of The Little Flower or the Society of St Philomena.
'The Franciscan Daughters of the Immaculate' has a nice ring to it.

Better still if a woman would step up and earmark a suitable saint or order for the purpose and get the ball rolling - this initiative needs to be driven by a female rather than a male.

All suggestions welcome in the comments box.

I can only think of sacristan type duties or, possibly, leading the Rosary before Mass each Sunday - and building up from there.

Maybe some grils girls might like to throw a few suggestions into the ring?
Posted by Richard Collins at Thursday, October 10, 2013