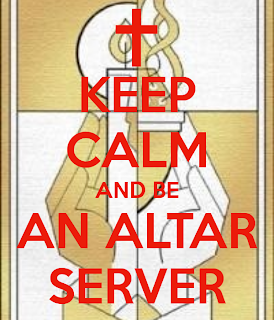 I am quite hopeful that Fr Z will be eagerly reading this post as he likes good news on a regular basis and, let's be frank (small 'f' please note) there ain't much of it around right now.

In fact, good news is about as abundant as.....as.....piety at a eucharistic service - ahem.

Well, my good news is that we have achieved a 100% increase in the number of altar servers able to serve the Latin Mass.

We've gone (in the whole of the Menevia Diocese) from altar server 'C' (who does sterling work on the sanctuary) to altar server 'J' who began his duties last Saturday at our Vigil Mass.

Well, I tell you why I am so pleased, it means that I am no longer the back stop server; in fact, I can hang up my cassock for good and my cotta is now surplus (?)

That is a cause for both sadness and rejoicing.

There is no greater joy than those precious moments on the altar when the server draws close to the celebrant, and close to Christ.

There is a wonderful intimacy, at various stages during the Mass; at the Offertory when one stands close to the bread and wine soon to be made Flesh and Blood.

At the Consecration, of course and, again, when accompanying the Lord to the altar rails and holding the plate lest any terrible accident may occur.

And what greater intimacy is there than when serving  Mass attended just by Mrs Linen in a private chapel early in the morning. Pure joy.

The rejoicing bit comes from the fact that I shall no longer have to creak and groan around the sanctuary (yes, I do know that I should offer it up but it does not make for a particularly attractive sight) and, anyway, I have always criticised altar servers of a certain age believing that this duty is best performed by boys and young men.

Now, I must also confess to a small sin of pride although, I do try to keep it under control.

This is my 65th year as a server (I did start rather precociously, at three months of age).

After 65 years of serving the servant of the Lord I think I am due a bit of a rest.

But, I still remember my brother Patrick, at the behest of Canon Musgrave, hauling me out of the family pew to be boat boy at Sunday Benediction   (remember Benediction?), and to service on the sanctuary for the first time.

And I vividly recall standing before Fr Steer in the Presbytery on a Saturday morning at the age of seven and reciting the responses of the Latin Mass.

This was a critical part of being an altar server; you could not serve alone until such time as you were word perfect, without the use of a missal.

That's a bit of mud in the eye for those who claim that Latin is elitist and beyond simple minds.

You could not get much simpler than my mind at the age of seven and, I'm sorry to say that Mrs L still harbours a belief that I have not progressed much past that stage.

Still, it would be good to know if 65 years as an altar server is a record (there's bound to be some LMS MC who is 105 and has notched up the century!).
Posted by Richard Collins at Saturday, October 12, 2013