A bad odour and a traditional Catholic 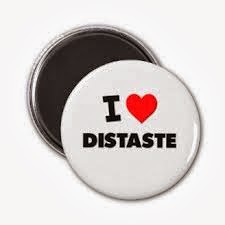 My last post concerned a prominent female blogger who appears to view traditional Catholics rather less favourably than something nasty found on the sole of her shoe.

This is not an uncommon reaction but, many years ago it was only one's work colleagues (non Catholics) who would curl their lips and wrinkle their noses when it came out that you were Catholic.

I believe that this was a show of both distaste  and fear born out of a form of grudging respect that they held for those of the Catholic Faith.

They knew that our Faith was black and white, no shades of grey, no prevaricating, something was either right or wrong (and then the whole world believed that homosexual acts were wrong).

Today it appears as if it matters not to the world if we are Catholic or Newt worshippers - we are worthless and to be ignored.

And now it is fellow Catholics who make silly faces when they learn that you are at the traditional end of the swimming pool, (the deep end).

Earlier this year I was making a return journey from up North (sorry, oop North) when I had to change trains at Stockport.

Who should be sitting in the platform waiting room, resplendent in his habit, but a Dominican Friar.

There is no sight more wonderful on our streets than a Dominican in full fig.

White stockings, black, highly polished shoes and a black and white habit with a set of large Rosary
beads interwoven into the hem of the garment.

As a child of the Order I felt compelled to sit alongside this epitome of the Faith and strike up a conversation with him.
We spoke of my Dominican school (St James' Burnt Oak) and of current affairs with regard to HMC.

And then I blew it. Our pleasant chat came to an abrupt halt when I asked the question:
" Do you celebrate Mass in the Extraordinary Form Father?"

His face betrayed him as if he had just taken a mouthful of dead rat.

"No, never" he spluttered, coming up for air.

And that, sadly, was the end of that. He made some feeble excuse such as having to catch a train and departed pdq.

He is, how shall I put it? One of the most senior Dominicans in the country and his name (which I shall not divulge) is very similar to a highly notorious brother Dominican with extreme left wing tendencies.

And therein lies the clue to his response.
If he had been a young OP he would have not made the silly face but, as a member of the old guard he had already made one somersault back in 1969 and he was not going to chuck away his "Spirit of Vatican II" shroud to make another about turn in 2013.
Fr Z's words, which have been taken out of context and twisted to make them appear uncharitable, ring true here.
I paraphrase:
The biological clock is running out on the old guard and, when they finally shuffle off, the Catholic world will be left with a stronger orthodox base.

Trouble is, many of us will have shuffled off by then also.

I am far from a paragon of virtue but, if I learn that someone only attends the OF Mass or, indeed, shows a dislike of the EF one, I do not pull a face.

And I wish our allegedly liberal friends would not do so either.
Posted by Richard Collins at Thursday, October 24, 2013