Margaret Thatcher RIP - she should have been a Catholic 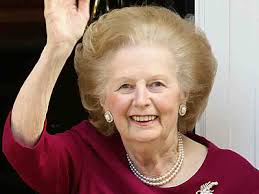 Today the world mourns the death of a woman who broke the mould and who is equally both loved and hated.

I do not love her but I do greatly like and admire her.

What did she give this country (and the world)?

She proved (if it ever needed proving) that women can make exceptionally good and effective leaders.

She faced up to the communist unions and the 'closed shop' mentality and won.

No man should have to work underground on his knees and suffer with lung disease; she broke the stranglehold of the mining unions and closed down the Victorian style coal mines.

She aligned herself with President Ronald Reagan and, in so doing, made a powerful contribution to removing the threat from the axis of evil.

Gorbachev fell under her spell when she recognised that he 'was for turning' and turn him she did. Mrs T had him sewn up even before he was top dog in the Soviet Union.

She enabled thousands of council house tenants to buy their own homes and gain a foothold on the property ladder.

Under her rule thousands of small businesses started up; many failed but many succeeded and went on to become major contributors to the economy.

Inward investment (especially in Wales) boomed as never before and never since.

There were no nuances under Prime minister Thatcher; all was black and white.

She gave her views straight and without the pussyfooting around that we have become used to under Blair, Brown and Cameron.

And she led Britain in a war against all the odds, fighting to free the Falklands from the shabby and rhetorical Argentinian dictatorship.

She did not suffer fools gladly; not all of her decisions were the right ones; but she succeeded in removing the shackles of Britain being regarded as the lazy, dirty, idle old man of Europe.

She broke the power of the trade unions and she gave to the poor something that no other party could give.

Esteem and self respect.

I do wish that she had been a Catholic.

More than that I wish that she had been a Catholic with reform of the hierarchy in her sights.

She would not have minced around Eccleston Square.

She would not have pushed for same sex "marriage".

She should have been a Catholic.

May she rest in peace.
Posted by Richard Collins at Monday, April 08, 2013