A post that is not Catholic - and not about cats either!

Sometimes it can appears as if one of the major qualifications to be a real Catholic Blogger is to have a cat or cats! There! I have done it, heresy is out of the bag if not the cat!

I realise that I risk untold wrath from the cat lobby but I do not possess one therefore I cannot write about one. That's a good bit of Thomist logic for you.
We shall leave it at that. If I were to state that I am  dog lover, I suspect it would be a bridge too far. So, we shall metaphorically do as they do around the dinner table in France when the conversation heats up; place a fork across a glass. It is a silent and polite way of saying: "Let's move on".

This post is unusual for me because it is not, per se, about the Faith. It is about a Wednesday afternoon I spent with my Beloved in wild and wintry Pembrokeshire.

It was yesterday, in fact. We took off with baguettes et fromage in tow and drifted around the highways and byways of the North Pembrokeshire Coast. We have lived here for 25 years but still find new coves and beaches, such is their proliferation here.
We found ourselves at a picturesque inlet called Abercastle or Abercastell in the Welsh. It is primarily, a fishing cove where small boats put out to catch crab and lobster in pots and then ship them off to Spain or France, so unfair.
Abercastle nestles in the cliffs that are decked with the bright yellow blooms of the gorse bush so typical of these coasts. We walked between the showers and lapped up the atmosphere and we may even have drifted off to sleep for a few seconds in the car afterwards so soporific was the sea air.

And then we found a plaque set into the harbour wall and discovered that an American of Danish birth one, Alfred "Centennial" Johnson had discovered this little port long before we had. On Saturday August 10th 1876 to be precise.
Alfred, stout man that he was, had taken it upon himself to be the first man to sail solo across the Atlantic and had left Gloucester, Massachussetts on June 15th of the same year.
His craft was a 20 foot open Dory and this had borne him through many storms and gales including one that had capsized him. Various ships stopped to offer succour but the only kind he received from one was two bottles of rum, and why not? 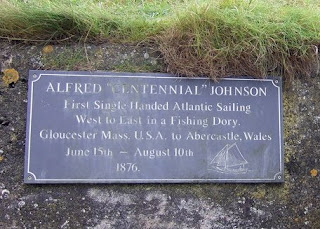 It would be wonderful to claim that Alfred was a Catholic but that would be stretching things too far. When asked in later life why he had made the trip he replied, very honestly: "Because I was a damn fool".
I like the cut of this man's jib and will offer up a prayer for his eternal soul and hope that, one day, after another voyage fraught with trials, I will meet up with him and shake him by the hand.
Photos: Wikipedia