Halliday Sutherland - the man who fought Marie Stopes in court and finally won! 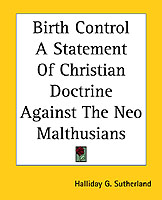 ﻿Halliday Sutherland was a learned medical Doctor, a great traveller and travel writer and, above all else, a defender of the faith.
In the early twenties, close on the heels of the Suffragette movement and the 'liberation' of women, one Marie Charlotte Carmichael Stopes was establishing herself as an authority on women's health and, most especially issues concerning sex. She opened her first Family Planning Clinic in 1921 in Holloway, North London.
Both the Catholic Church and the Church of England launched an attack on Stopes but it fell to Halliday Sutherland to make the main assault in his book 'Birth Control: A Statement of Christian Doctrine Against the Neo-Malthusians.'
The book carried a passage that Marie Stopes and her legal team were able to fasten upon:
"Exposing the Poor to Experiment.
"Secondly, the ordinary decent instincts of the poor are against these practices, and indeed they have used them less than any other class. But, owing to their poverty, lack of learning and helplessness, the poor are the natural victims of those who seek to make experiments on their fellows.
In the midst of a London slum, a woman, who is a Doctor of  German philosophy (Munich), has opened a Birth Control Clinic, where working women are instructed in a method of contraception described by Professor McIlroy as 'The most harmful method of which I have had experience'
(Proceedings of the Medico-Legal Society, July 7th 1921.
Sutherland went on to slate the Government of the day stating: "It is truly amazing that this monstrous campaign of Birth Control should be tolerated by the Home Secretary, Charles Bradlaugh was condemned to jail for a  less serious crime"
Marie Stopes took the case to the libel court and, after a battle involving some of the top lawyers of the time, she lost the case but immediately went to appeal whereupon the decision was overturned and victory was hers.
Sutherland, being a gritty Highlander was not given to losing and he took the case to The House of Lords and won.
He married Muriel Fitzpatrick in 1920 and the couple had five sons and one daughter. One son was killed in the war and one (Richard More Sutherland RIP) became a priest in Westminster Diocese and a personal friend of mine.
He was an authority on tuberculosis and built up a reputation for his medical knowledge, his wit and his writings that included a series of books. The most famous was 'Arches of the Years' but, in 'A Time to Keep' he covers a pilgrimage to Lourdes and makes several interesting insights on St Bernadette and Our Lady.

In 1954 he was made Knight Commander of the Order of Isobel the Catholic and was presented with the Pope John XXI medal in 1955.
Marie Stopes, when writing about the case some years later described him as:
"The most cocksure man in the British Empire"
﻿Eternal rest grant unto him, O Lord,
and let perpetual light shine upon him.
May he rest in peace. Amen
Posted by Richard Collins at Tuesday, April 19, 2011