Is this the best crib in the land?

Most church cribs are pretty good in my opinion.
And, of late,  garden centres and cash and carries have started retailing two foot high crib figures, so there may be a resurgence of displays in shop windows in the future.

It would seem to me, that church groups might well start a fundraising campaign to buy crib figures that they can loan out to interested retailers at Christmas.

Some years ago the Red Cross organisation (apart from denying that their 'cross' had anything to do with Christianity) placed a ban on cribs being displayed in their shop windows.

And now, in the American Forces canteen in the encampment at Guantanamo Bay, I read that a crib (what do they call them in the US?) put in place by some members of a construction team, has had to be removed to a chapel just in case anyone becomes overcome by fundamentalist tendencies and starts reciting the Rosary or something.

Having also read today in The Daily Fascist, that most young people believe that Father Christmas appears in the Bible, it might be a much needed initiative.

But, please tell me, don't you think that the crib below is quite the best in the country?

It is the work of Fr Jason Jones of The Sacred Heart Church in Morriston, near Swansea. 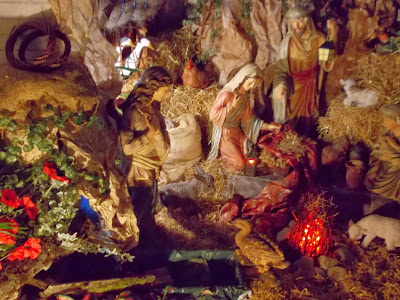 Every detail is there, just as it probably was in Bethlehem; there are a few chickens nestling down in the straw, the odd lamb, of course, a duck or two (why not?).

And, if you take your time to study all of the scene, you may see other animals, such as.........but look for yourself.

Let me help you out, there's a donkey, all the way from Finestrat, maybe. Some glowing lanterns.

What's that on the sack of grain?

A rat! Heavens above! But what would be more natural to find in a stable? 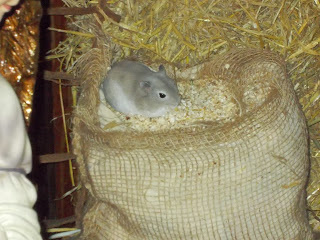 Even the Vatican has its share of rodents who like nothing better than to gnaw away at the heart of the Church.

Now, you may think (depending upon your attitude towards felines) that there's an animal species missing.

Email ThisBlogThis!Share to TwitterShare to FacebookShare to Pinterest
Labels: Best crib in the UK, Catholic Cribs, Morriston, The Sacred Heart