Will Cristina Odone assume the mantle of Alice Thomas Ellis?

I do not mean that in any demeaning sense with regard to the writing styles of either Alice Thomas Ellis or Cristina Odone, it is just that it is rare that we Catholics are endowed with a journalist who is not afraid to speak out on behalf of burning sensitive issues such as homosexual and lesbian marriages, IVF, abortion and so on. 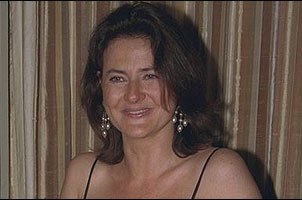 Alice Thomas Ellis has passed to her eternal reward but, in her day, her straight talking, no nonsense approach to Catholic life endeared her to the few traditional Catholics who were clinging to the mast during the
80s and 90s.

Now Cristina Odone appears to be moving in the same direction; perhaps not quite with ATE's traditional verve but, who knows what's down the road?

I admire people who stick up for the faith, in many respects becoming "dry" martyrs, being pilloried by commentators and their contemporaries and being booted off the editorial team as happened to Alice Thomas Ellis when she was dismissed from The Catholic Herald payroll after criticising the late Cardinal Hume.

Cristina Odone is now taking similar flak (coincidentally, if I remember correctly, she was the Editor of  The Catholic Herald at the time of ATE's removal).

Currently, she is being targeted by the 'hate' gang of homomaniacs and perverts who rise like scum to the surface whenever the subjects of goodness and decency are mentioned.

Here is a sample of some of the more printable comments after Cristina's blog entitled "Heterosexual marriage: the love that does not dare to speak its name":


"You keep complaining of people like yourself being seen as bigots. Perhaps if you do not want to be accused of bigotry you should avoid comparing homosexuality to lechery, polygamy, and child rape as you did in a recent poll. My God, you are vile".

"I can't. I just can't. What a hot mess of an article.
Perhaps "heterosexual married couples" are so dang happy because *they're not the target of bigotry every day from you, and from people like you*? Cristina, you're a bigot. And if marriage makes people happy, WHY DO YOU WANT TO DENY NON-HETERO PEOPLE THAT HAPPINESS? It makes ZERO sense".

"The problem with Cristina is that she basically whips up these "all gay people think all straight people are bigots and they hate us lines", which naturally then cause straight people to be defensive. SHe creates a gay backlash all of her own - whereas if she just shut up, we would all get along fine"

There are 240 more comments that, in the main, are full of invective which indicates how the liberal lobby reacts when matters homo/lesbian/trans/and bisexual are raised in the media.

But where did Cristina Odone begin her career? We know that she was born in Kenya to an Italian father and Swiss mother and that her early life was spent on the international circuit accompanying her parents to wherever her father's role as international banker took them.

After her parents divorced she attended an independent school in Oxford and mingled with over 40 nationalities before going to Oxford to read French Literature and History.

After Oxford came The Catholic Herald post which she held for four years before going overseas to assume a role in the financial sector.
She has worked for The Spectator, The Observer and the New Statesman and is now currently writing for The Daily Telegraph and also blogs on the Telegraph site.

She has four books to her name, one being 'The Good Divorce Guide'.
I have no knowledge of the content of that book or, indeed, of Ms Odone's marital status other than she is married to a financial journalist, Edward Lucas.

The fact is, she is an avowed Catholic and she does appear to write sensibly with regard to matters of faith and morals and that type of journalist is as rare as a pork chop in a mosque.

In 2007 she withdrew from a Royal Commonwealth Society Christmas Carol concert where she was due to speak because the organisers felt that her remarks could offend those of "little or no faith".

Here are some of those remarks as extracts from her speech:

’I wonder what the Christian children at Portree Primary school in Skye would say about equal opportunities. Their local authority had forced them to drop the word "Lord" in the grace before meals, as it was deemed offensive.I wonder what Shabina Begum would make of equal opportunities. She was the young Muslim girl who took her school to court when it banned her from wearing the veil? And what of Nadia Eweida? Does she think this is a country of equal opportunities? She was the woman, you may remember, who learned the hard way that a Christian may not wear a crucifix when working for BA.

As to her traditional Catholic outlook?

Well having followed her writings over the years I can say that she is moving in the right direction....literally.