"Ave Maria" - Flying the flag for the unborn in Melbourne 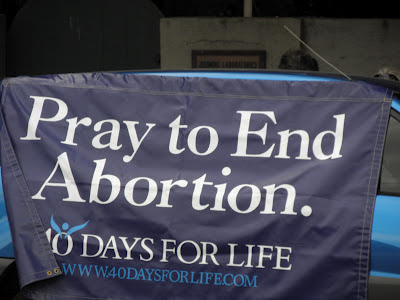 Tuesday morning and a small group is gathered outside an abortuary near the city centre.
Behind a wall lies a tree screened building quaintly bearing the title  'North Melbourne Procedural Day Centre' as though it was some municipal place of rest from the busy, uncaring world.

Whereas, of course, it is a place where deeds most bloody are carried out routinely and the victims are the unborn and the girls and the women who have been scared or duped into agreeing to the 'procedure.'
Plus, the prospective fathers who get little or no say in the matter.

We joined the group and were met with a warm reception, the Rosary continued and then we sang 'Soul of my Saviour and proceeded through the set pattern of prayers and hymns as laid down by the Forty Days for Life organisation.


A complete cross section of Catholic society came to join the group and came and  went in the course of the next two hours; young mums with children in push chairs, students, retired folk and an excellent organiser, Trudy, who kept the prayer rota going evenly and smoothly.

We only met with a bit of anger from one young executive type who marched past very quickly shouting-
"Why don't you get a life" - but that is what precisely we were doing, getting a life and, maybe getting several lives, but the irony was lost on him.

More hymns, the good, traditional ones such as 'Come Holy Ghost', 'Ave Maria' and, of course, 'Salve Regina'.
There is no better hymn to sing in public than Salve Regina - it is the battle hymn of the faith and it stirs the blood no end. It turns a timid Catholic into a brave Catholic.

Bemused office workers hurried past and the groups' numbers rose and fell reaching, at its lowest 3 and at its highest, some 13 souls. Not bad for 10am on a Tuesday.

Here is a prayer that was included in the 40 Days prayer book:-

My Child, when you come to serve the Lord, prepare yourself for trials.
Be sincere of heart and steadfast, and do not be impetuous in times of adversity.


Cling to Him but do not leave Him,
that you may prosper in your last days.


Accept whatever happens to you;
in periods of humiliation be patient.


For in fire gold is tested, and the chosen in the crucible of humiliation.
Trust in God and He will help you;
make your ways straight and hope in Him.


You that fear the Lord, hope for good things,
for lasting joy and mercy.
Consider the generations long past and see:
has anyone trusted in the Lord and been disappointed?


Has anyone persevered in the Lord and been forsaken?
has anyone called upon Him and been ignored?
For the Lord is compassionate and merciful;
forgives sins and saves in times of trouble.

Email ThisBlogThis!Share to TwitterShare to FacebookShare to Pinterest
Labels: 40 Days for Life, Catholic Australia, Melbourne against abortion, Standing up for the faith