What makes a good Bishop? Ullathorne has the answer 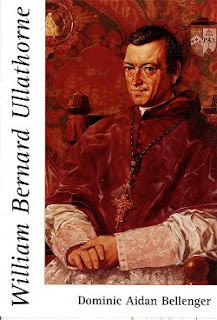 I am interrupting my series of posts on the life of Archbishop William Ullathorne to feature an extract from some of the writings of this great man because they have great resonance for us here and now.


Archbishop William Ullathorne never wished for the spotlight, in fact, he had requested, at an early stage in his vocation, to lead the life of a contemplative but his superiors had seen something in this young man that gave them reason to believe that they were in the presence of a great future cleric.


More than that, a leader of clerics as well as Men.


This is part of his appraisal of the post and role of  a Bishop, and interestingly, despite being written over 130 years ago, his observations ring so very true to the circumstances that we find ourselves in today.


Secularism on the rise, Science taking over from God..........over to His Grace:


"The dangers of the present age are intellectual; it is an age of false science and false theories respecting God and the human soul.


The age is striving to do without God, in science, in government, in the education of the people, man is held up to himself as all-sufficient for himself.
The Church is bid to stand aloof from the moral guidance of human affairs.
It has become a point of policy amidst nations nominally Christian to banish God Himself from the affairs of men, and in His place to take possession of the souls and consciences of men, that they may be managed according to the desires of nature, and as if no better principles of guidance, no brighter light from God had ever been given.


And has God no witness left?

Is there no prophet any more? There is. To this age of unbelief, to this age of godless teaching, to this age of troubled minds and distressed consciences, the bishop is the mouthpiece of God, and represents the prophetic character of Christ.


He preaches.
To the world, which, like a wayward child, is impatient

to be taught, he speaks as one having authority, devoid of human respect and indifferent to human criticism, even as disregarded "the judgment of man's day;" as the appointed messenger of God he speaks with clear, decided, unhesitating tones.
Holding possession of the whole body of revealed truth, in season and out of season he presses the advantage of truth against error in all its shapes and combinations, he plants those accurate definitions and those precise expositions which reveal to man the mind of God, and strike error to its centre.
He rides.
By the moral law and the right of his authority, he binds the consciences of men and holds them to the law of God.
Where might is in the ascendant in place of right, and the law of right is
unacknowledged, as with the trumpet of the doom he makes the principles of right, truth, and virtue to be heard, and their necessity to the cause of God and the welfare of society.
He consecrates.
Securing God's portion in the world, His acre, His tabernacle, His altar, as the sources of grace to men, and of blessing to the earth.
He will not hear the cry that God keep to His heavens and leave the earth to Caesar, without rebuking it.
And never were the bishops of the Church placed in a better position for the exercise of their prophetic office. Stripped of earthly splendour, disencumbered, of the world, set free from the odium that fell upon them from alliance with the State, and standing on no other ground than that of apostolic authority, the bishop of the nineteenth century is all the stronger
for the change. No longer the servant of princes, he is tenfold the servant of the people. He is tempted to no compromises of policy between the cause of
God and that of the world.
What was said by an eminent orator to the Revolutionary Assembly of
towards the close of last century is everywhere exemplified in this : " Drive the bishops from their palaces, and they will find refuge in the poor man's cottage ; snatch their jewelled crosiers from their hands, and they will grasp a staff of wood."
If ever a Catholic bishop was strong, he is strong in this hour of the world's history.
He is strong because he is free. He is strong because he lives a simple and frugal life. He is strong because he is a bishop and nothing but a bishop ; strong, therefore, in the vivid consciousness of his high office.
Strong he is in the affections of his people, of a people who hold the faith with loss of advantage in this world, that makes the representative of that faith all the dearer to their souls.
Strong, and vigorously strong is he, because more closely than ever united with the apostolic chair.
Such is the Catholic bishop of this nineteenth century."
(From Ecclesiastical Discourses Delivered on Special Occasions (1876)

Such a portrayal of the qualities of a bishop is enough to set the pulses racing and to ask oneself where it all went wrong.

But, in reality, it has always gone wrong in periods of the history of HMC.

Another Archbishop, the late Fulton Sheen of the USA, told his audience that the Catholic faith peaked and troughed in 500 year cycles; at times the faith flourished and at others, it died away under the pressure of Huns, Freemasons, Nazis, Communists and now, the Secularists, Atheists and Liberalists.

So now the time is ripe again for a bit of pressure and a little persecution.

And you know what?  That may make better Catholics of us all.


NB: If anyone knows how to get rid of annoying white backgrounds, please share the knowledge!