Abortion facts for the education sector

To be more precise, what we quaintly call, in Britain, the Further Education sector (most people from overseas regard Undergraduate and Post Graduate programmes as 'Further Education' but, there you go).

In the UK, Colleges of Further Education cater for all ages, all groups, but most of their students fall into the 16 to 24 age group; a prime audience for advice, information and counselling on the evils of abortion.

But, ask a College Student Counsellor what advice they give to students regarding pregnancies and they will trot out the same old "contraception and 'morning after' abortion pill type options."

I once asked a College Counsellor if she ever discussed or promoted abstinence from sexual intercourse as a fundamental principle for keeping young people safe and well (physically as well as morally), she gave me a very odd look.

So, the group who call themselves Abort 67 have been targeting FE Colleges to raise awareness of the horrors of abortion. Excellent. This must be a prime target audience.

Photo: Abort 67
Recently, Abort 67 stood with their posters outside Worthing College and the Principal, being forewarned, issued a call to the student body advising them to keep well clear.

Ha! That Principal would appear to know nothing of the mindset of the young; just say "No" and they will do it.

And do it they did, and Abort 67 reportedly, had a high level of interest shown in their display and information.

Even a Facebook entry from the Worthing police did nothing to reduce the numbers who flocked to the display... 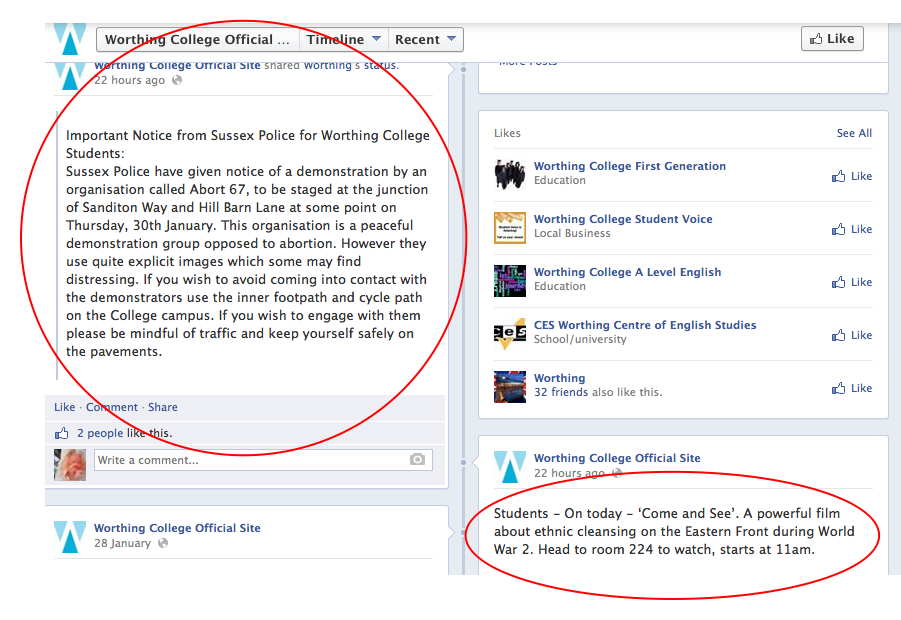 Now, Abort 67 make a point of using graphic images of aborted babies on their posters and leaflets.

This upsets some people who believe that it does more harm than good but, I believe that, used sensitively (not using the posters in the vicinity of a primary school, for example) horrific pictures bring the reality of abortion home to those who see them, with an almighty force.

You will see the double standards of the education sector that, on the one hand,  warns against the "explicit images" used by Abort 67 and then promotes a "powerful" film on ethnic cleansing on the same page.

So, my point is that SPUC and the Forty Days' for Life and other Pro Life groups may like to consider setting up their stall outside FE Colleges as well as abortuaries.

That may actually cause some to think before a pregnancy occurs rather than afterwards.
Posted by Richard Collins at Monday, February 03, 2014