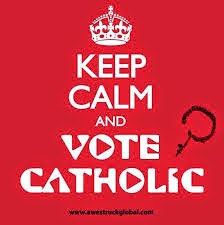 I was unable to use the information sent to me by a friend prior to the elections held last week for the European Parliament (Wales) and for local council representation (England).

But, it is equally relevant to the looming General Election due to take place in May 2015.

Historically, the Catholic vote in Britain has always gone to the Labour Party.
And that has always mystified me.

Scratch most Labour MPs and you will find a socialist or, even, a communist past.

That can only mean one thing for Catholics......ultimate destruction of the Faith is the hidden agenda of hard line socialists and reds.

The Conservative Party has disgraced itself in the past few years, most notably by pushing through legislation for homosexual "marriage" and I dislike the way in which David Cameron leaps on every bus but the Christian one, in order to gain a few votes.

As for the Liberal Democrats, their track record regarding homosexuality and other unmentionables, is pretty horrific.....it must be a prequisite to becoming a LibDem MP!

So, UKIP beckons and, they appear, at this stage, to be capable of giving the big three something of a bloody nose come 2015.

Now the following message was one sent, so I believe, by Bishop Thomas Burns of Menevia to his clergy.

I am not one of Bishop Burns' most fervent supporters but, his message here is fair and an example of how a good bishop should lead his flock.

Read his comments now on the Welsh Election (in light) and then in the spirit of the 2015 General Election (in bold):

EUROPEAN ELECTIONS
Two documents (plus one in Welsh) are enclosed for local use, at choice,
regarding the upcoming ELECTIONS TO THE EUROPEAN PARLIAMENT.  Please
encourage people to vote. That is the important thing. It is estimated that
the greater the turn-out, the less will be the chances of a populist result.
Sadly, a great deal of information currently available contains inaccuracies
and selective argument. Prejudice governs many publications. People are to
be encouraged to research carefully the truth of many promises that are made
- and the gaps that appear because some policies are not mentioned.
ENCLOSED: Prayer for Europe.

NATIONAL ELECTION 2015
Catholics are to be advised that they cannot vote for an intrinsic moral
evil that they may find in a candidate's manifesto - even if the rest of the
manifesto conforms to their own views and to sound teaching.  Catholics are
urged to research what candidates stand for, and discover their attitude to
questions of conscience. We should encourage all Christians to be involved
in politics. Our Christian duty to vote is to be emphasised. In addition, we
can advise that a distinction is valid between politicians who fail to
exercise their responsibilities and those who are dutifully committed,
though sometimes being burdened with unjust criticism and distorted
allegations.

I certainly get the drift of Bishop Burns' message but, if we follow it to the 'T' we, of course, will not be able to vote for any candidate or party.

I do not think that any of the contenders are likely to repeal the law on homosexual "marriage" (for example) so how, therefore, are we to proceed?

I have always considered the abortion issue as being the overriding determining factor when it comes to casting a vote, and with all parties being in favour of it have tried to determine which one was the most likely to reduce the number of weeks 'window' in which abortions may be carried out.
There may also be an opportunity to take a long term guess as to which party might, (unlikely at present, I agree) make abortion illegal once more - don't look to the LibDems for this.

Of course, I am making abortion and same sex "marriage" the two key elements regarding where I place my electoral (as opposed to pectoral) cross - but, I do not think that too many of you will disagree with that.

Email ThisBlogThis!Share to TwitterShare to FacebookShare to Pinterest
Labels: Bishop Burns advises how to vote, Cameron opposes Christianity, Catholics and the General Election 2015