Could this conceivably be a war memorial? Unthinkable.

A statue of Sir Winston Churchill? Certainly not.

Well then, maybe a handprint of Sir Elton John? Yikes! No way!

It's the memorial plaque to the Martyrs of England and Wales who gave their lives for their faith and the latin Mass. 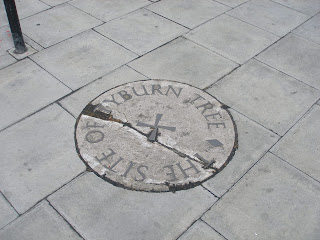 It survives, (just about), in the central island of London's busy Edgware Road and Hyde Park; insignificant, unnoticed by virtually all who pass by.

Known only to a few Catholics and seemingly forgotten and neglected by the Catholic Church and Westminster Diocese in particular.

I visited the spot this week to say a prayer or two and was shocked to see how this lump of cement and brass letters had deteriorated in the space of two years, since my last pilgrimage.

It looks as if some seriously heavy earthmoving equipment has been over it a few times, the concrete is now cracked in several places and what was once an insignificantly placed memorial has now become almost unrecognisable, an uneven piece of the pavement.

I posted on this subject two years ago and even followed through with Westminster City Council who told me that plans for establishing a new memorial, monument even, were with Archbishop's House.

Nothing appears to have been done.

What would it take to get this project back on track? A will, certainly, a modest amount of cash (which, I am sure would be readily forthcoming if only someone asked for it) and a design for the memorial.

Not a faint imprint on a traffic island but, possibly, a replica of the original Tyburn Tree.

Is that asking so very much?
Posted by Richard Collins at Saturday, September 08, 2012