The only saint in the village - St David

Today, March 1st, is the feastday of the patron saint of Wales, St David. 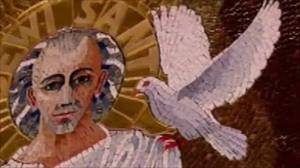 The son of King Sant and St Non, David was born on the outskirts of the town of Menevia, now known as St David's, and after receiving Holy Orders he studied under St Paulinus.

His reputation as a speaker and an intensely holy man spread rapidly and he became the first Bishop of Menevia, a diocese still in existence today with Bishop Thomas Burns being the present incumbent.

Many miracles are attributed to him but, perhaps the best known one occurred at Llandewi Brefi, a village now widely known thanks to the television series 'Little Britain.'

As St David preached the word of God, the ground beneath his feet rose up to create a small hill so that he could be more easily seen and heard by his flock.
When he was appointed as bishop, a white dove alighted on his shoulder and, to this day, is depicted in paintings and mosaics of the saint.

David founded a monastery in Pembrokeshire and is believed to have been buried in the cathedral dedicated to him.

The Cathedral website has a rather neat timeline spanning from the time of the Saint to the present day.

Only problem is......the Reformation and the dissolution of the monasteries (St David's being one such) are not mentioned.

Nicely done. How to dispose of the Catholic problem by referring to superstition and not mentioning the genocide that took place as the hospitals, farms, estates, schools and welfare systems operated by monks and nuns were closed down and their occupants cast out without anything other than the clothes they were dressed in.
I also like the use of the word "removed" when they could have used ransacked, plundered, vandalised, robbed etc.

But back to Saint David. He was, by all accounts, austere in his spirituality and no wines or ales were consumed in his monastery.

He carried out severe acts of mortification on himself including standing up to his neck in cold water for hours at a time and anyone with any knowledge of the sea temperatures around the Pembrokeshire coast will appreciate just how much of a penance that was for this great man.


COLLECT
Grant, we beseech Thee, Almighty God, that the loving intercession of blessed David, Thy confessor and bishop, may protect us, and that, while we celebrate his festival we may also imitate his steadfastness in the defence of the Catholic Faith.
Concede nobis, omnipotens Deus, ut beati David, Confessoris tui atquae Pontificis, pia intercession nos protegat, et dum ejus solemnia celebramus, in catholica tuenda fide firmitatem imitemur.

St Non's Well and Chapel, the birthplace of St David, are located less than a mile from St David's Cathedral and the Bishop's Palace and are steeped in Welsh Catholic history.
Posted by Richard Collins at Saturday, March 01, 2014