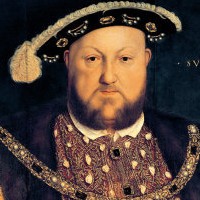 Was he bad or just plain mad? Henry VIII, one time Defender of the Faith turned from an apparently devout Catholic to a sex mad serial killer. He was also a financially challenged sex mad serial killer and lusted for money as much as he lusted for the flesh and a male heir.
But is it just to write about him in such terms? Many, today believe that he has been misunderstood and that his behaviour was a result of his  suffering from either a genetic disorder or a personality defect or both.
I don't doubt it that as a possibility but he was still bad as far as I am concerned.

How many  'A' Class criminals have claimed insanity once they were apprehended for their crimes, Sutcliffe (The Yorkshire Ripper), Brady (The Moors Murderer), Michael Stone, Ted Bundy and many more.
I am sure that they do or did suffer from some form of mental handicap but I am also equally sure that they knew what they were doing; they knew the distinction between right and wrong and that makes them culpable.

Hitler, Stalin, Chairman Mao were all responsible for the deaths of not just a few million souls but something in the region of one hundred million!

Are we to believe perhaps that they were just a shade psychologically below par? Maybe, but they were still bad, very bad.
I can hear the liberal squeaks right now..."you should not be judgemental" and "only God knows if they were truly bad". To which I respond: "Why not?" to the first and: "I agree" to the second.

We need to be judgemental in our lives, to determine whether it is a good time to cross the road, whether Messrs Slapdash and Bodgit Ltd are good builders whether Miss Godfrey's visitations from Our Lady are genuine or not.
We use the facts that are at our disposal to inform our judgement and always with the caveat that the final word is God's. We do not condemn people to hell we do not even speculate as to whether they are worthy of hell; that is God's province. But there is every reason why we should determine whether they are good or bad.

The Catholic Thing has phrased it rather well:


Of course, if a human person commits an immoral act, we judge the actor as wrong. But we do so precisely because we respect his humanity and the power of moral choice that all human beings possess by nature. Though some human beings cannot exercise that power because of immaturity or illness, they are nevertheless moral subjects deserving of moral respect. They possess no less a human nature than do their mature and healthy peers.
Henry VIII set in motion a series of events that were to result in the deaths of thousands of the poor and vulnerable (as well as the religious). With the Dissolution of the Monasteries came the end to the monastic welfare state that provided employment, medical care, education, shelter and, indeed, food and drink for the poor and aged. According to Thomas Cobbet in his History of the Protestant Reformation, thousands died by the roadside, unable to fend for themselves. Cobbet writes of Thomas Cromwell, the King's chief instrument for carrying out the bulk of the sackings of the religious houses and their valuable chalices, plate and works of art:-

Cromwell was acting on Henry's orders, orders that also saw the murder of several of his wives as well as great men such as St John Fisher and St Thomas More.

The romantic in me often wonders what would have been our lot if Henry had been a good man and continued to encourage the Catholic faith to prosper (England at that time was deemed the most pious country in Europe, hard to imagine today).

What would England and Wales be like today? Could it be that, as Big Ben strikes 12 noon today a  procession of two hundred monks and nuns will leave Westminster Abbey after a Solemn High Mass (EF of course), and halt in Parliament Square to recite the Angelus before processing to Marble Arch to sing hymns at the shrine to the martyrs of Tyburn. They are joined by thousands of workers from the various Guilds and an army of priests hear confessions in the open air.........well, it might not be precisely like that today but one may dream.

Of one thing I am certain; Henry VIII belongs in a gallery with Mao, Stalin, Hitler and the rest. Possibly mad, maybe misunderstood but definitely bad!