The Cardinal who spoke out against ecumenism

Today is the anniversary of the death of one of the great figures of the Reformation period, a leader of the Faith at a time when all was crumbling in Britain and beyond. 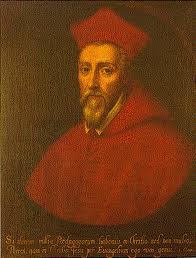 He did not die a martyr's death but he was a martyr of sorts nonetheless.

William, Cardinal Allen dedicated his priestly life to the cause of retaining the Faith in England and Wales at a time when both clergy and laity had apostasized and converted to the new Protestant faith, in massive numbers and within a very short period of time.

He died, in Rome, in 1594 at the age of seventy two, remorseful of the fact, that he had been instrumental in sending so many young priests to certain death on the mission and had not been able to join them in their sacrifice.
But his great gift to the struggle to maintain the Catholic Faith was in his work in founding Douay and other Colleges where young men were prepared for the priesthood and an almost inevitable early death.

He believed that Protestantism was a temporary glitch and that England would  soon return to the one true Faith and he had this to say about the slide of many of the Faithful into heresy by their attendance at Protestant services:

"Never teach or defend the lawfulness of communicating with the Protestants in their prayers, or services, or conventicles where they meet to minister their untrue sacraments; for this is contrary to the practice of the Church and the holy fathers of all ages, who never communicated or allowed in any Catholic person to pray together with Aryans, Donatists, or what other soever.

Neither is it a positive law of the Church, and therefore dispensable on occasions, for it is forbidden by God's Eternal Law, as by many evident arguments I could convince, and it hath been largely proved in sundry treatises in our own tongue, and we have practised it from the beginning of our miseries.

And lest any of my brethren should distrust my judgement, or be not satisfied by the proof adduced, or myself be beguiled therein in my own conceit, I have not only taken the opinion of learned divines here, but to make sure, I have asked the judgement of His Holiness (Pope Clement VIII) thereon.

And he expressly said that participation in prayers with Protestants, or going to their services was neither lawful nor dispensable"

Those, today who 'share' services with people of other Christian faiths should take note. This was not just a single Cardinal speaking out against the errors of combining two religions with contrasting beliefs. Cardinal Allen's words were confirmed by the Pope at the time and the words "unlawful" and "dispensable" are as true today as they were 400 years ago.

William, Cardinal Allen - Pray for England, pray for Wales, pray for the world!