Would you destroy this church? 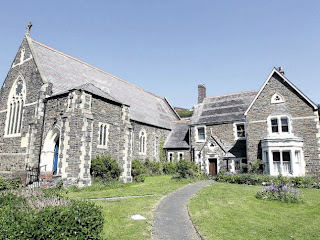 Not a bad looking church, some remedial work needed

Bishop Burns of Menevia is at the centre of yet another controversy (see links at end of post).

He wishes to sell off an old church in the seaside town of Aberystwyth and build a sparkly new one.

So what? Good for Bishop Burns you might say, others....well.

You see, the new church will be built (if the good Bishop has his way) at a place called Penparcau and that, my dear friends is further than you can throw a druid, from the town centre. Quite a bit further, some 1.5 miles further in fact.

So what, one might ask, will happen to the old and the infirm, the elderly and the lame?

The Bishop says they can get a bus as he will organise services around the bus timetables but, as anyone with any knowledge of Wales knows only too well, rural buses on a Sunday are as rare as an EF Mass - and that means, pretty rare!

Again, Bishop Burns flags up the Health and Safety aspect of continuing to use the old church, plus the fact that it will cost £2.6 million to do it up.

Really?.......run that past me again my Lord.......2.6 million pounds? my builder Mike would do the job for a couple of thousand and, (I state this with no knowledge of the building other than reports received from those who should know and from observing the pics plus a little knowledge of renovation costs) a larger building company would, I am pretty certain, do a complete renovation for circa 200k.

What is it? A new roof, yes, a bit of structural reinforcing? yes, re-wiring and a new heating system? OK and then a coat of paint - job done!

Of course, there is the issue of the site of the present church, St Winefride's, being a high value bit of real estate....but don't let's go there....yet.

An overriding sadness regarding this issue is that there seems to be a split between those who want to stay and those who wish to go. I have no knowledge of how many there are in either faction; in a way, it doesn't matter.
The main issue is, to ensure that the old and the infirm etc., are still able to attend Sunday Mass as normal.

But the Bishop is reported by the BBC as stating that those who are for the move should get the others to pack it in. That would seem to be more than a tad divisive.

Here is how the Beeb reported on the matter - it's transcript so please bear with the format:


In a pastoral message, Bishop Burns, who is based in Swansea, said the church was not fit for purpose and could be closed on health and safety grounds.
Plans are to demolish St Winefride's and sell the land for housing.

"Tell the protesters politely to back off. Speak to them, or write to them”

Quoted Bishop Thomas Burns.
In a message to parishioners Bishop Burns said a small number of objectors had already contributed to the project's heavy costs of £100,000.

He said: "My dear people, the above tactics that the protesters have used, including petitions and submissions to their local councillors, have brought us to a serious moment.
"Throughout these last few years, the structure of St Winefride's church has continued to weaken. It is in such a bad state that our insurers can no longer provide suitable cover for the deteriorating walls and roof if they should collapse.
"I am increasingly concerned about health and safety matters. Masonry and other bits and pieces have been coming down. I may soon have to make a decision about closing the church, to prevent risks to life and limb."
The church site in Queen's Road, which includes a dilapidated parish hall and presbytery, would cost the diocese more than £2.6m renovate, added the bishop.

But objectors claimed they had been shown no evidence the church was structurally unsound.
Appealing to his parishioners, Bishop Burns added: "Tell the protesters politely to back off. Speak to them, or write to them.
"You know who they are, and you also know that they do not represent your parish. They have contributed to the heavy costs that have already been incurred, amounting to over £100,000.
"Please tell them that enough is enough. They risk leaving Aberystwyth with no Catholic parish church at all."

Objectors said moving the church out of the town centre to Penparcau would make it difficult for older members of the congregation to attend services.
But the bishop said church services would be tailored to bus schedules, where possible.
An objector to plans for St Winefride's, who wished to remain anonymous, said: "The old church (St Winefride's), which has been there since the 1870s, is planned to be demolished because they say it's not fit for purpose. Some parishioners go along with this and others do not.
"We don't want the church to move out of the town centre."
The objector also questioned whether the church was structurally unsound although agreed it was in need of repair.


I don't think that saying "Tell them to politely back off, is a very good thing to say in the circumstances.

And to follow it through with a threat to the effect that the whole issue might end in no parish church whatsoever for Aberystwyth is just plain nonsense.

Aberystwyth is a fine seaside town with a resident population of c. 13,500 souls, a number that dramatically swells with the University students that live in the town, to around 21,500.

If you estimate the Catholic population (based very roughly on the information available online) as being a 5% average for England and Wales, that leaves Aberystwyth with some 1075 Catholics, not a bad sized parish for a Welsh rural town.

So, to talk of leaving them stranded without a church.....well, what do you think?

And, as far as arranging Mass times around the bus schedules I leave you with an extract from an online guide to the town:


Buses in Aberystwyth are a shambles: local operators change routes and times every few months with little or no notice. Even basic passenger information is lacking at bus stops. Taxi, walking or private car is usually less troublesome.

So, the best of British with that one, Bishop.