Publishers Jeeves and Radscarp have commissioned a sequel, specially written for an adult readership,  to one of Enid Blyton's 'Famous Five' series of children's books. 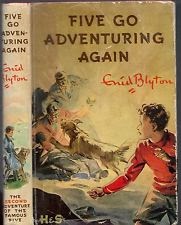 In the updated version, the Five are all now in their late sixties and members of ACTA (A Call to Arson).

The aims of this group are to overthrow the wicked Catholic Church by undermining its teachings on issues such as the sanctity of human life, women priests and  the celebration of the Latin Mass, a ceremony full of ritual and sinister chanting.

In keeping with the times there have been a few name changes for the five main characters.

Julian has become Darren, Dick is now Ciaran, while Anne (now a nun of sorts) is now known as Sister Kylie.
The tomboy George (Georgina) has changed to Grunty and the final member of the gang, the happy go lucky scruffy but loveable mongrel, Timmy, is now called Basil.

A spokesman for Jeeves and Radscarp said that:
"We plan to launch an updated version of 'Five go adventuring' featuring the charming  'gang' of friends and their hilarious adventures as members of ACTA and, if this is successful, fans can look forward to many more updated titles in the future".

Here is an extract from 'Five go adventuring again':

"Come on Darren" cried Cieran as he eased open the solid and heavy church door. "Let's see what we can vandalise inside".

"Wait for me boys" yelled Grunty:
"Remember I've got to lug Sister Kylie around after she sprained her ankle when she fell off the tabernacle in the last church we did over".

The five entered into a darkened church where just one or two candles flickered in front of what the gang called effigies of the saints.

A low growl alerted them to Basil's presence.
He was sitting on top of a pile of magazines and, yes, he was still having trouble with his old problem.

"Stop him, oh, stop him do" shrieked Grunty:

"He must not defile copies of The Tablet, it's our main organ for fomenting dissent aside from the Bishops Conference"

"Be quick with those matches said Sister Kylie, we need to start a really good fire this time. I want to see this old church go up in flames".

No sooner had she uttered these words than the Sacristy door was violently kicked open and there, silhouetted in the doorway, stood the figure of the parish priest Father Blogton.

A double click informed them of the fact that, he was holding his Burns and Oates, 12 bore pump action shotgun, and it looked as if he was prepared to use it.

"Run" they all shouted, apart from Basil who gave a loud whine and relaxed his bowels all over the copies of The Tablet........"
Posted by Richard Collins at Monday, February 24, 2014

Email ThisBlogThis!Share to TwitterShare to FacebookShare to Pinterest
Labels: A Call to Arson, A mongrel called Basil, A the Catholic Church, ACTA, The Tablet