A sin sensor would be helpful 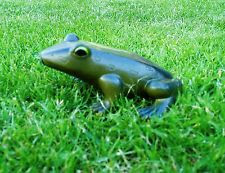 
Having something of a problem with vermin such as foxes, stoats, weasels, cats and squirrels who all seem hell bent on eating my bantams or destroying the birdlife of my garden I fell totally for a plastic frog on the shelves of my local poundstore.

Not just any old common or garden plastic frog but one that incorporates a motion sensor so that, if a warm blooded being passes in front of it....it croaks, loudly and scares the living daylights out of the potential  predator.

Sadly, not being a classicist, it makes a "Ribit-ribit" sound rather than a "Koax-koax" one but, as Deng  Xiaoping once said: "I don't care if it's a white cat or a black cat as long as it catches mice" - are you still with me on this trot through the animal kingdom?

So now, I have invested in a few of these frogs, guard frogs, really (ugh!) and dotted them around the orchard so that any unsuspecting carnivore will get the shock of its life and skedaddle for good.

Sadly, the signs are (don't ask) that the vermin are still around - but one of the frogs certainly gave Mrs Linen the fright of her life as she was strolling through the garden.
Note to self: 'Speak to wife more often'.

It did strike me, however, that it would be a wondrous thing if we had some sort of inbuilt sensor that would emit a loud "ribit" just as we were about to commit a sin.

Just as you reach for that extra Krispy Kreme doughnut - "RIBIT" - just one more tot before bed? "RIBIT" - about to poke fun at one of those charismaticky Catholics and double "RIBIT".

In fact, it's such a sound idea that I'm surprised that the CDF hasn't commissioned some implant research so that we could all have one.
Imagine, the confessionals would be empty (except that they're already empty), purgatory would become a distant memory (it's already a distant memory as far as Catholic education is concerned) and sin would be a thing of the past.

Ooops! Sorry, forgot that sin is already a thing of the past!

Forget it. Who needs reminding about sin anyway? "RIBIT"

Email ThisBlogThis!Share to TwitterShare to FacebookShare to Pinterest
Labels: Catholic conscience, Sin is a thing of the past