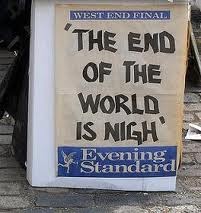 I am a great fan of Damian Thompson who writes for The Daily Telegraph and has a very good blog, Holy Smoke.

I used to be a commentator in his combox but then it all got a bit too trollish for wimpish me and I stopped.

I was not doing any good and it was not doing me any good.
But I do occasionally drop by and see what people are saying. Paul Priest (OTSOTA) keeps the flag (and the flak) flying for the faith and for sanity and I also enjoy the comments made by one, Benedict Carter.
I know not whether he bloggeth or not.

I am not an ' end of the world is nigh' merchant, and neither, I am sure is BC but he does have a post of significance...here it is:


"A French nun, Sister Madelaine Porsat, who died in 1843, was a seer. She had a vision of seven plagues coming before the end of the world and the Second Coming.


The sixth one is universal bankruptcy.


("Here is the sixth plague, the crisis of commerce. Commerce approaches its end because the wheel of the cart no longer has its pivot, confidence.")


The only link I found in a quick search online was to a book in French, 'Voix prophétiques: Prophéties modernes proprement dites' by a JM Curique.


Can anyone tell me if they have read this book, and what are the other 6 plagues, including the seventh to come?"

Time to get planting out those cabbages, I reckon!


And please spare time to visit this blog by Charlie J who is, dare I say it? The world's youngest blogger - I await contradiction.

Young Catholic bloggers need our encouragement so please drop by on Chasubles and Chalices to say Ni Hao!
Posted by Richard Collins at Friday, October 21, 2011