It is strange that, so often, when I start laboriously composing throwing a post together, some other blogger posts much more eloquently on the subject a mere hour or so before I am ready to click on 'publish'.
That's life I suppose, so fulsome credit to Jeffrey Tucker of
The Chant Cafe for summarising all that I have said in one picture.

There will be some who will not like commercial applications being made to the faith but I hope that this post will not be regarded as being too offensive.
You see, there are times when perhaps, we, or the powers that be, need to take a long hard look at the Church and to try to see it as others see it.

So throw a metaphorical log on the fire and bring your battered armchair closer while I attempt to explain and expound. 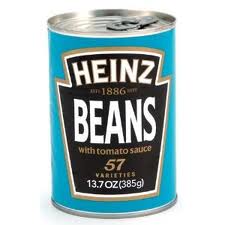 Heinz Baked beans is a popular and successful brand. Why? Well, first and foremost the product (the beans and the sauce that they are in) are of good quality. That is, overstating the obvious, critically important.
But we can't see the beans or the sauce when the can is sitting on the supermarket shelf...so how do we make a decision as to whether we want to try a can to see what the contents are like?

Well, tradition plays a role here. Or maybe reputation might be a better word in this context.
Most people have grown up with the range of Heinz products - from the cradle to the gravy!
It is globally well known brand and, in general, well appreciated. You pay a slightly higher price for it than a non conformist brand but you have to pay for quality in the commercial world.

Next, there is the familiar label and logo - that shouts 'beans' and 'quality' at us. It is also as familiar to us as it would have been to our parents, grandparents and so on. Yes, really. Continuity is everything, the label may have changed imperceptibly every decade or so, just to keep pace with the developing world but it is still eminently recognisable as Heinz whether it is a 1911 tin or a 2011 one.

You see, continuity is good, recognition as to what the brand and product is about is good...it leads people into trying it if they have not already done so and it keeps those who know the brand loyal to the brand.

So (and this is where the post takes a sudden turn that, hopefully, you did not see coming) what sort of Catholic brand image do you project to those around you?

Are you instantly recognisable as a Catholic?

Do you have that element of continuity? The Hermenetic of Continuity?

Are you true to the original teachings of Christ?

And as to Holy Mother Church - what sort of image does she project?

Please understand that those comments are not directed at those laity who make a stand for the faith, who pray outside abortuaries or who go on pilgrimages or undertake arduous feats out of love for mankind (well done David Aron for completing 184 gruelling miles).

My remarks are directed at those in authority within the church, the priests who dress in tracksuits to go about their business, the nuns who have forsaken the cross and, of course, the Bishops who, above all others, should be cementing the image and setting the pace.