As a Catholic I mean.

Here in rural Wales, life has taken on a slightly surreal aspect.


Six weeks ago a large white buck rabbit appeared in our garden.

The rabbit stayed with us for days and the days merged into weeks. It was joined by another white rabbit.

My wife gave them names. She hoped for an outcome. She had visions of a garden full of fluffy baby white bunnies.

I knew that the odds were stacked against them.
It's wild down here; we have foxes, wild cats, badgers, mink, stoats, polecats, buzzards and things that go bump in the night.

So, the buck disappeared (I think the Bishop may have eaten him).

I caved in and bought some rabbit feed (just for fattening purposes, you know).

Did I mention the pigeons? 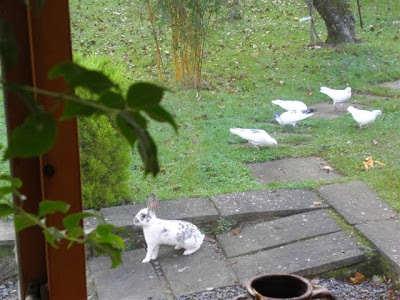 Some white pigeons put in an appearance and began to breed like....er....well...rabbits, actually.

And then they were joined by some recusant rough Trafalgar Square types of pigeon who have now, a la ++ Fulton Sheen's story, of how a man released white doves on an island and how eventually, through indiscrimination, their progeny turned mottled and then bog standard blue (an allegory for liberal Catholics, see).
We now have a garden that resembles pet's corner at the zoo.

What to make of all this?
Down in peaceful Pembrokeshire this is 'hold the front page' sort of news.

The thing is both rabbits and pigeons seem to be thriving on this outward bound type existence (I'm also providing corn for the pigeons, in case you hadn't guessed - purely for fatt.....well, you know the rest).

It strikes me that these animals are much better off outside the hutch or pigeon loft, free of the care of their owner and free of the bars that hold them.

Maybe, I could go the same way, be free, feral and better off.