It is, of course, the issue of the mortal remains of Richard II of England. 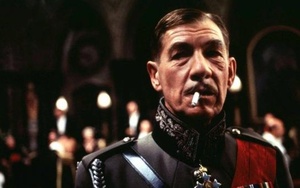 Did he have Welsh blood in him? He certainly has the
air of a Cardigan man about him

Found and disinterred in a car park in Leicester (close to Bosworth Field) it has long been trumpeted that he will be re-buried in the Protestant Leicester Cathedral accompanied, presumably, by heretical prayers.

I have posted on this before and on the fact that, as he died a Catholic, and was first buried in sanctified ground according to the rites of Holy Mother Church, he should now have a Catholic resting place.

Furthermore, he should be re-buried after a special Tridentine Latin Mass has been celebrated in his honour and in his presence of his remains.

Forget the Sarum Mass, of course, it is likely, but by no means certain, that his original Requiem Mass was celebrated in the Sarum Rite but that is no longer in general use while the EF Mass is.

Now an unlikely call to arms has come from Cristina Odone (Odd-one) who has the following to say on the matter:-

"The prospect of a  Westminster Abbey state funeral, or of his being moved to York Minster (more than 1500 citizens of York have signed a petition for him to be moved there) would have horrified this pre-Reformation Catholic. No matter what his links to York; no matter how tickled his vanity by the offer of a pomp and circumstance send-off, he'd expect a Catholic burial.
Anything else would shock him. He wouldn't recognise the unfamiliar rites of an Anglican state ceremony. He'd regard the established Church as sacrilegious, the work of a hateful Tudor who'd taken the divine right of kings too far. When the bodies of the Russian royal family were found in a mineshaft in the Urals, they were laid to rest– with a proper Russian Orthodox service celebrated in a proper Russian Orthodox cathedral. Surely this Catholic king should be accorded the same respect?
So no more talk of York Minster or of the Abbey. Let Richard III be buried in Westminster Cathedral. John Francis Bentley's red brick building in Victoria is little-known outside the country's four million plus Catholics – it could do with a celebrity occasion to boost its profile. What better way to achieve this than by the reburial of a proud king and humble sinner?"

You may read the full account on CB's blog HERE

Well, Westminster Cathedral might ruffle a few Yorkist feathers but it's not a bad final resting place.

Mind you, I am sure that some blogger, somewhere, might come up with a genealogical link that determines that King Richard was a Welshman.

In which case I am sure that room could be made for him in Cardiff's Catholic Cathedral, if that is not an oxymoron.

Perhaps the final word should be left with those that WS attributed to Richard:

"I shall despair. There is no creature loves me,
And if I die no soul will pity me.
And wherefore should they, since that I myself
Find in myself no pity to myself?”