Spode - the Dominican dream that is now a fading memory You may be forgiven for thinking 'china' when you hear the name Spode mentioned and, indeed, you would not be a thurible throw away in terms of context.

The one time head of the Spode family, Josiah Spode IV, (Christian name choice came hard in the Spode family) converted to Catholicism and established a Dominican Priory, Hawkesyard, near Rugeley in Staffordshire.

The house alongside the Priory was called Spode House and it eventually fell into the ownership of the Dominican Order who decided that it should be a centre for Catholic enterprise.

I use the word enterprise because that is how it appears to me.

Spode House became a hub for retreats, those wishing to study church music, theatrical groups, youth organisations, you name it and they flocked to Spode for their two or three days of rural total immersion in all things Catholic.

Taken from the Catholic Herald Archives is the following quote that sums it up very well:

"...Yet my affection is not so much for Spode House as for the idea behind it: the meeting together over a few days of Catholic men and women with common interests, specialised knowledge, hopes, causes, arid the free, open discussion of important Christian topics of the day...."

Some of the London based Dominican Fathers, most notably Fr Donald Proudman OP, gathered young Catholics from disparate walks of life and formed them into a loose knit group that became known as 'The Spodeites'. They were one of the groups that would gather at Spode for two or three weekends of the year and pray and reflect and meditate and go carousing - all in good Chestertonian fashion (although some of the more abandoned carousing was gently frowned upon by some of the priests).

Most of my six siblings went through the Spode years ahead of me and, when my turn came, just before the Second Reformation Council sat in Rome, the signs of decay were just beginning to show.

The bulk of the group came from the Haverstock Hill (naturally) area of London led by one Robert Malone. Professional actors Michael and Shirley Robbins aka Hal Dwyer ( husband and wife) were part of the gang and, generally, a good time was had by all.

As well as Fr Proudman there was the grim faced but heart of gold warden, Fr Conrad Pepler and the saintly Fr Columba Ryan.

The Spode concept was a grand one. To bring together all the parochial elements of lay Catholics and to encapsulate them in a solid framework of the faith so that the sense of Catholic identity was reinforced at the same time as inspiring and enthusing the faithful to greater efforts and zeal.

I only attended three Spode weekends and then, somehow, the life began to drain away from the retreats.....largely because the main shaker and mover in all of this was Fr Proudman who had been despatched to minister in Barbados where, shortly afterwards, he was to die, may God have mercy on his soul. 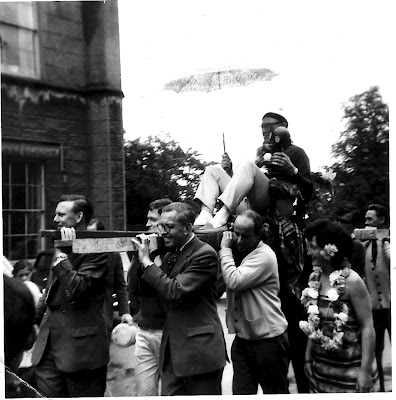 Being carried is Fr Donald Proudman OP, unusually in civvies,
I guess because of the pre Barbados party planned for him.
Centre is actor Michael Robbins and leading is Richard Owen
all others (bar one) unknown


My own memory of Spode is pretty dim although one incident sticks out clearly.

A group of us had (quite wrongly) broken away from the more spiritual exercises to go in search of real ale. It was the heart of a very cold, bleak winter and the river was heavily frozen over.
Having only a vague idea of the direction of the nearest pub we set off walking along the frozen river (the footpaths were deep in snow).
After what seemed like hours, we came across a local farmer taking hay to his stock.

We asked him the way to the pub which was called The Ash Tree.

He stopped and removed his cap and thoughtfully scratched his head in the fashion of all good farmers and finally said: "Why the Ash Tree is about 40 miles from here"

We were overtaken with a sudden attack of the Lot's wife syndrome.

And then we realised that something had been lost in translation......he had thought we said ESTUARY...no wonder he looked puzzled.

I now look upon the Juventutem movement as being the modern equivalent of Spode; if only a base such as Spode House was still available for all groups to join together, what a force that would be.

Maybe it is as Fr Z would say......"a brick by brick enterprise" - something for a future weekend.
Posted by Richard Collins at Friday, July 20, 2012