Yes, you DO need to wear the black, not just say it!

If your Parish Priest wears jeans, sweaters, or any non clerical gear - show him this article!

Following on from my post regarding priestly garb, H/T to Roman Catholic Vocations http://romancatholicvocations.blogspot.com/ for the article below which deals far more learnedly with the subject than I ever could.

"23 Reasons Why A Priest Should Wear His Collar" 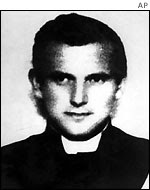 Photo at left: Pope John Paul II after his ordination to the Priesthood
1. The Roman collar is a sign of priestly consecration to the Lord. As a wedding ring distinguishes husband and wife and symbolizes the union they enjoy, so the Roman collar identifies bishops and priests (and often deacons and seminarians) and manifests their proximity to the Divine Master by virtue of their free consent to the ordained ministry to which they have been (or may be) called.
2. By wearing clerical clothing and not possessing excess clothes, the priest demonstrates adherence to the Lord’s example of material poverty. The priest does not choose his clothes – the Church has, thanks to her accumulated wisdom over the past two millennia. Humble acceptance of the Church’s desire that the priest wear the Roman collar illustrates a healthy submission to authority and conformity to the will of Christ as expressed through his Church.
3. Church Law requires clerics to wear clerical clothing. We have cited above number 66 of the Directory for priests, which itself quotes canon 284.
4. The wearing of the Roman collar is the repeated, ardent desire of Pope John Paul II. The Holy Father’s wish in this regard cannot be summarily dismissed; he speaks with a special charism. He frequently reminds priests of the value of wearing the Roman collar.In a September 8, 1982 letter to Ugo Cardinal Poletti, his Vicar for the Diocese of Rome, instructing him to promulgate norms concerning the use of the Roman collar and religious habit, the Pontiff observed that clerical dress is valuable “not only because it contributes to the propriety of the priest in his external behavior or in the exercise of his ministry, but above all because it gives evidence within the ecclesiastical community of the public witness that each priest is held to give of his own identity and special belonging to God.”In a homily on November 8, 1982 the Pope addressed a group of transitional deacons whom he was about to ordain to the priesthood. He said that if they tried to be just like everyone else in their “style of life” and “manner of dress,” then their mission as priests of Jesus Christ would not be fully realized.