1585 and Bl Marmaduke Bowes takes to the scaffold

A leading Yorkshire layman, Bowes was, for some years, an apostate, fearing to lose his goods and land. He would, never, however, refuse sanctuary to priests on the run and he held open house for these brave men.
The tutor to his children, under examination by torture, informed on Marmaduke and he and his wife were thrown into prison at York before being released under a 'bond of reappearance'.
At his trial he was found guilty and, within three days of his execution, he was reconciled to Holy Mother Church, professing that he hoped that his martyrdom would make recompense for his period as an apostate.

"This day is salvation come unto this house"
Luke xix - 9 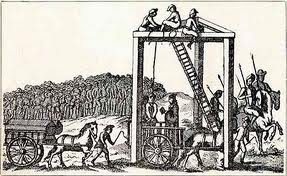 "THERE ARE SOME BAD TRADITIONALISTS
BUT THERE ARE NO GOOD LIBERALS"
Posted by Richard Collins at Friday, November 26, 2010