The Nagasaki Martyrs live on in chant and prayer 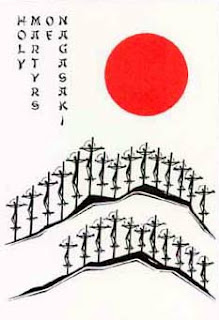 On 15th September 1627, 23 Japanese priests and converts were martyred for their faith. Two years later, three more Portuguese Franciscans were added to the list making up the Twenty Six Martyrs of Nagasaki.
The remaining Catholic population of the region went underground and, even today, Nagasaki has a concentration of Catholics greater than any other area in Japan.
Some of the Crypto-Christians found their way to a small island called Ikitsuki where, in relative isolation they were able to continue as Catholics albeit without priests. Over the intervening period the liturgy and worship of these people became somewhat distorted; they were a peasant community and had little in the way of missals or any guidance as to  how to proceed with their faith, totally cut off, as they were, from the outside world. In the mid to late 19th century, Japan opened up its barriers and freedom of worship began to become acceptable once more.
The liturgical elements became mixed with Shintoism and Buddhism and the latin that they spoke by word of mouth also took on a pidgin, phonetical form.
Today, the remnants of this religious mix still survive and there is even a professional choir called Oratio (Orashio) Kai. I have a CD of their work and I have to admit that, whilst it is fascinating it is definitely for  committed historical tastes.
Sadly, when Catholic Missionaries moved back into the territory in 1865, only a percentage of the islanders returned to the mainstream faith and the rest, the Kakure, continued with their blend of Latin and Japanese Plainchant.
What is relevant is the way in which the faith, once rooted, is impossible to destroy, even over the course of 400 years.
﻿
Posted by Richard Collins at Sunday, November 28, 2010