This day in 1583 John Slade, a schoolteacher, won his crown

Taken from Winchester Prison, he was arraigned in the market place and, immediately after being taken off the hurdle, he knelt down and made the sign of the Cross on the gallows posts.
A Protestant chaplain interrogated him on the question of the Queen's Supremacy but he answered:
"The Supremacy hath and doth belong to the Pope by right from Peter and the Pope hath received it as from Divine Providence. therefore, we must not give those things belonging to God to any other than Him alone"
As the moment of execution approached, he was questioned further and he replied:
"......I will acknowledge no other Head of the Church but only the Pope....."

He was then summarily executed. 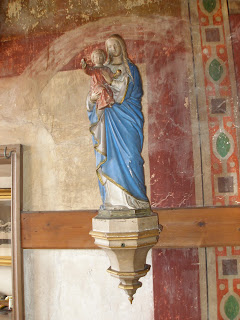 Our Lady Queen of Martyrs
Posted by Richard Collins at Saturday, October 30, 2010